I've not done much diagnostics yet but some information is better than none.

Starting with the power board of the console to check it is working to at least the standby (non-switched) rails.

Remove all components from the power supply so it is not connected to the HDD, Disc drive or motherboard. Connect the mains power plug into the socket on the back of the console going into the power board.

Take your multimeter and test on Voltage AC and measure you are getting power over both sides of the fuse.

﻿WARNING: Be very careful not to touch the probes together or touch any exposed metal as there is mains voltage running throug the power board that can kill.﻿ 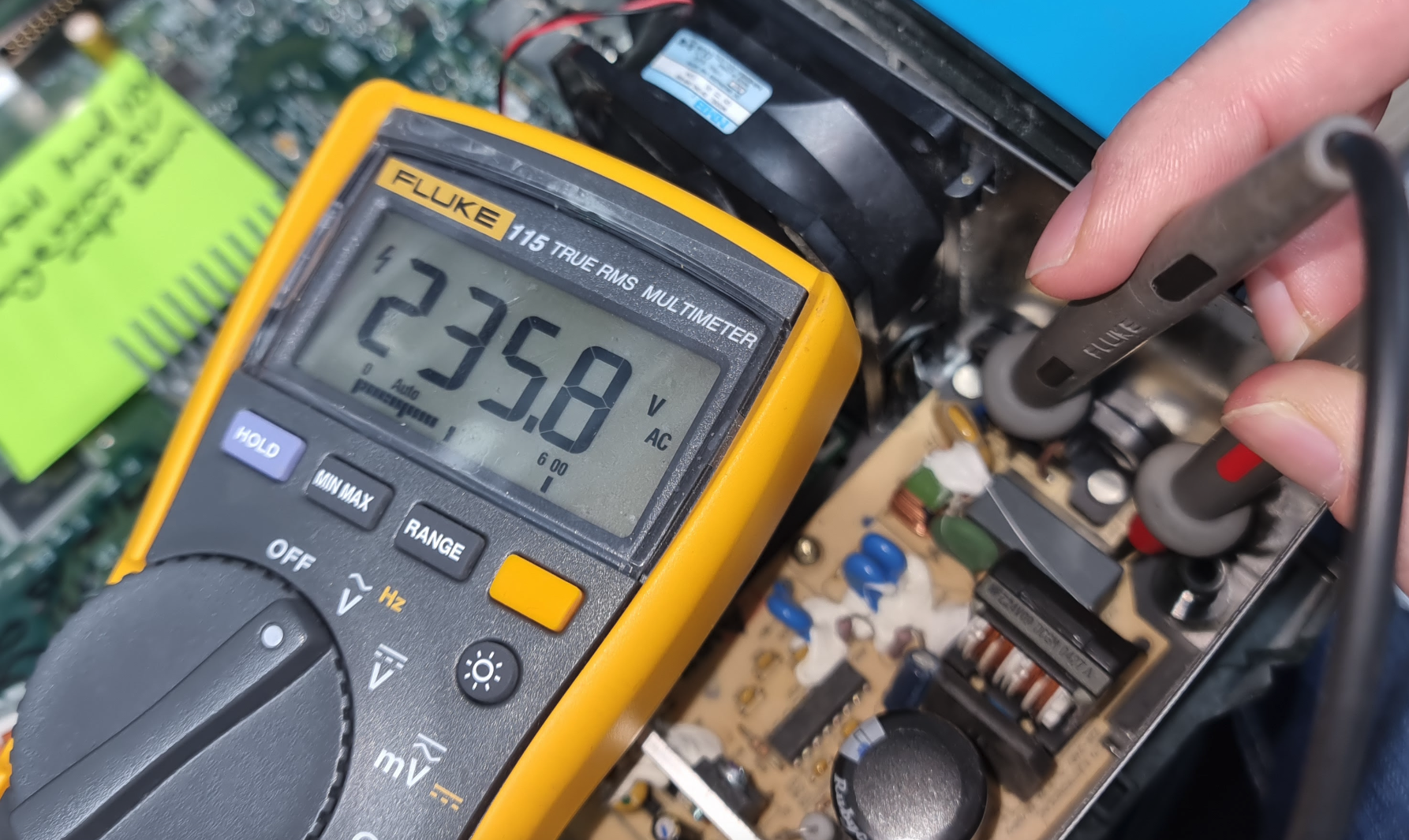 Put the COM/black probe on the Neutral pin, and then Voltage/Red probe on each side of the fuse one at a time. 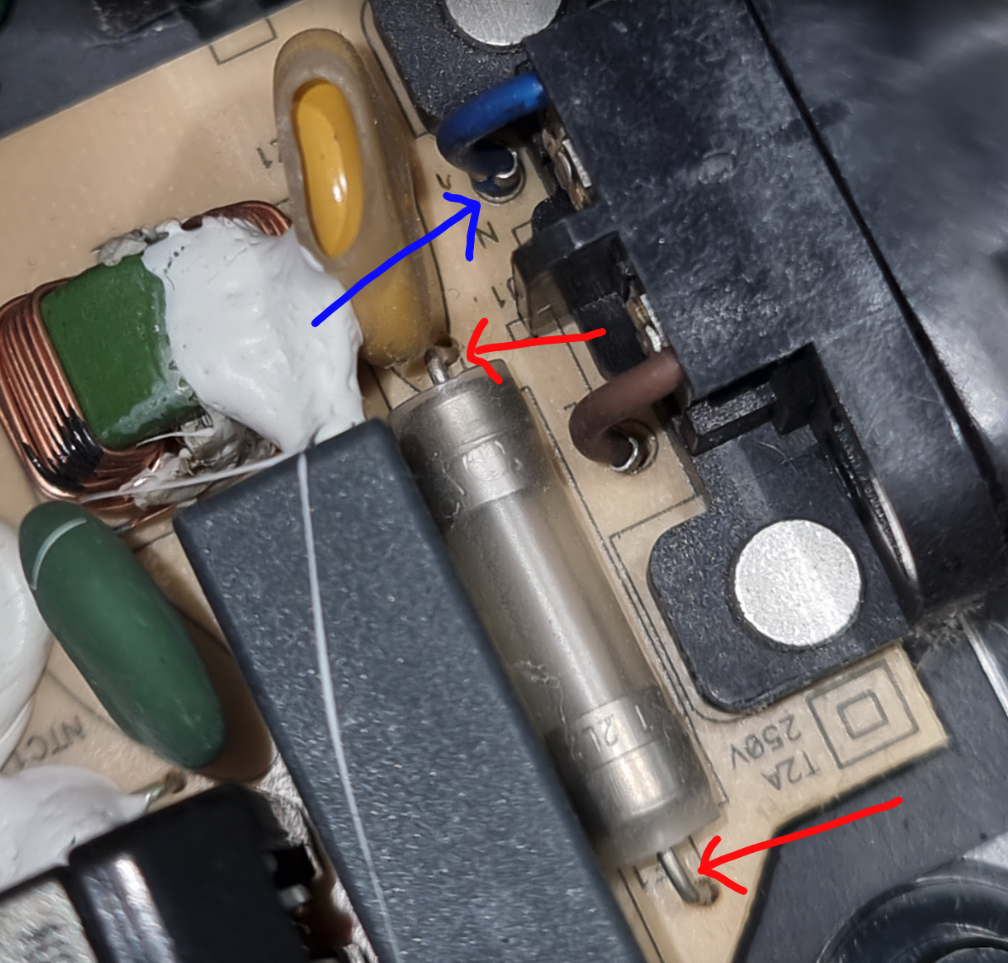 If you get 110/230V (depending on your region) on both sides of the fuse, your power board is at least getting mains power into it. If it does not, disconnect the power, leave it 10 minutes so it is safe to touch and work on.

Set your multimeter into continuity mode and test the fuse. It should read around 0 to 3R and beep. If it reads 0L the fuse is blown and needs swapping. 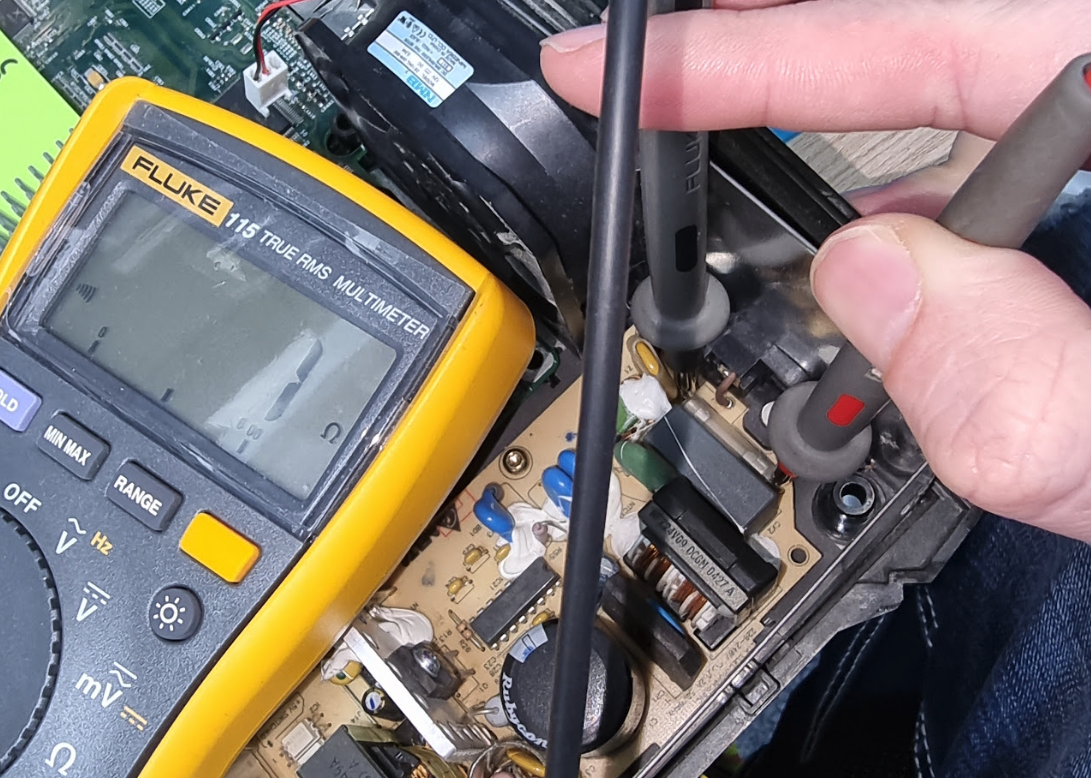 If all that is good, move on to checking the output of the power board connector, making sure it is disconnected from the console.

With mains AC applied, but the connector not inserted into the motherboard, the only rail you will get is the 5V rail. 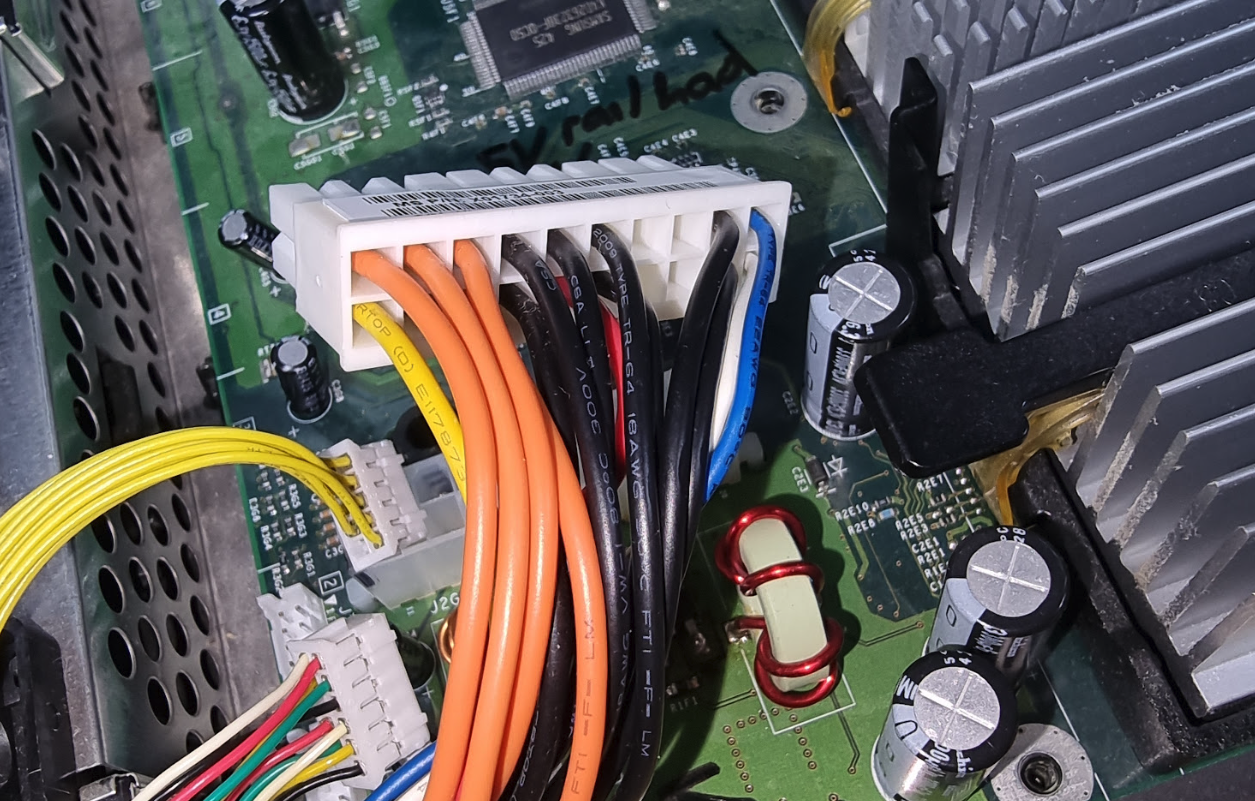 Take your multimeter, turn it to Voltage DC, and test the black and orange wires for 5.5V (it drops to 5V once connected to motherboard). 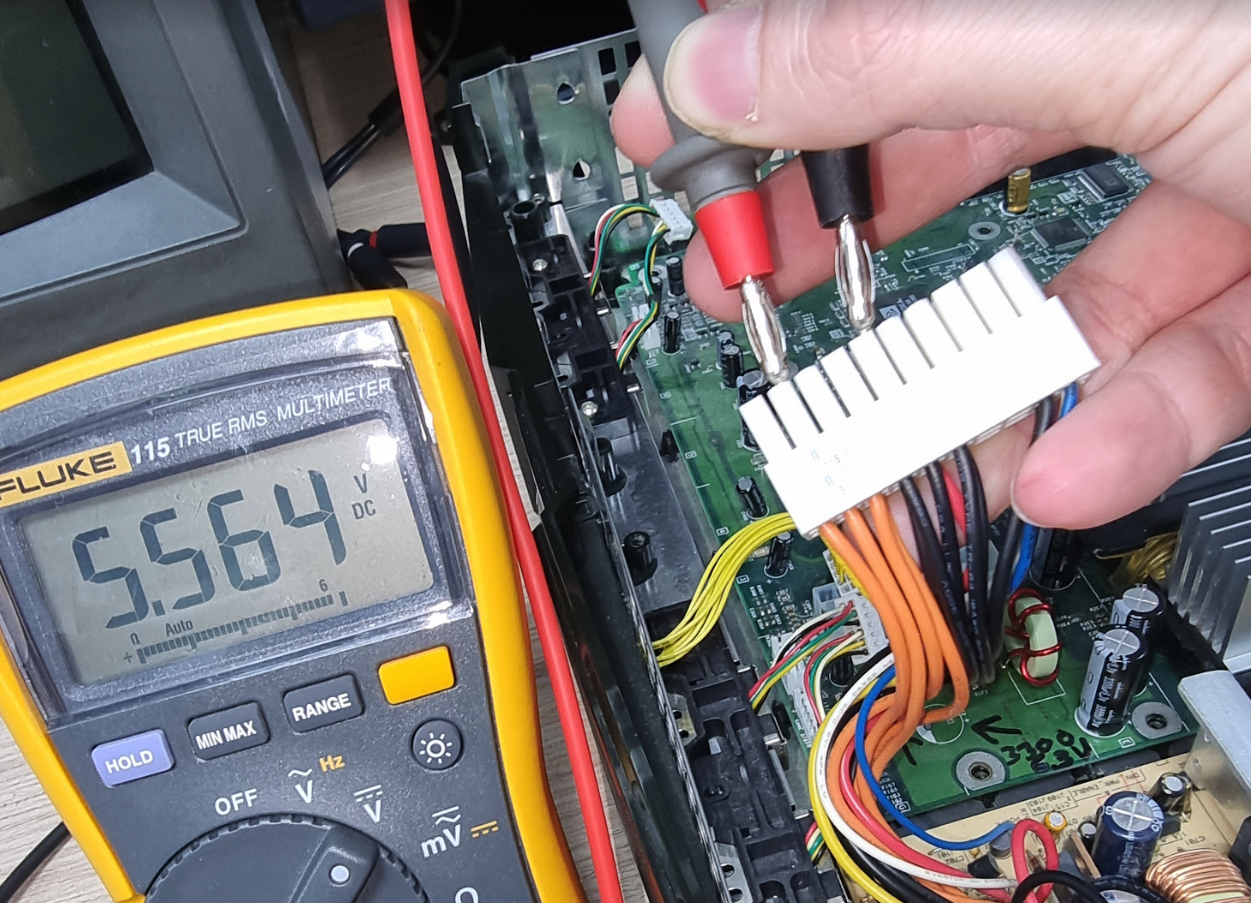 If you do not get this rail, something on your power board is damaged and needs fixing.

Each version of the Xbox has different connectors. Here are the voltages for each color wire and the pinout of a 2004 version of an Xbox.

The orange 5V and the blue 3.3V standby rails should be active before connecting to the motherboard.

Some motherboards I have observed only output the 3.3V standby voltage once connected to the motherboard, which is likely due to the lack of an SMC on the later revisions and the motherboard being involved in generating that standby 3.3V signal from the 5V signal.

Connect the Front Panel cable (in this case the yellow cable) into the motherboard, and press the power button on the console to trigger power on. 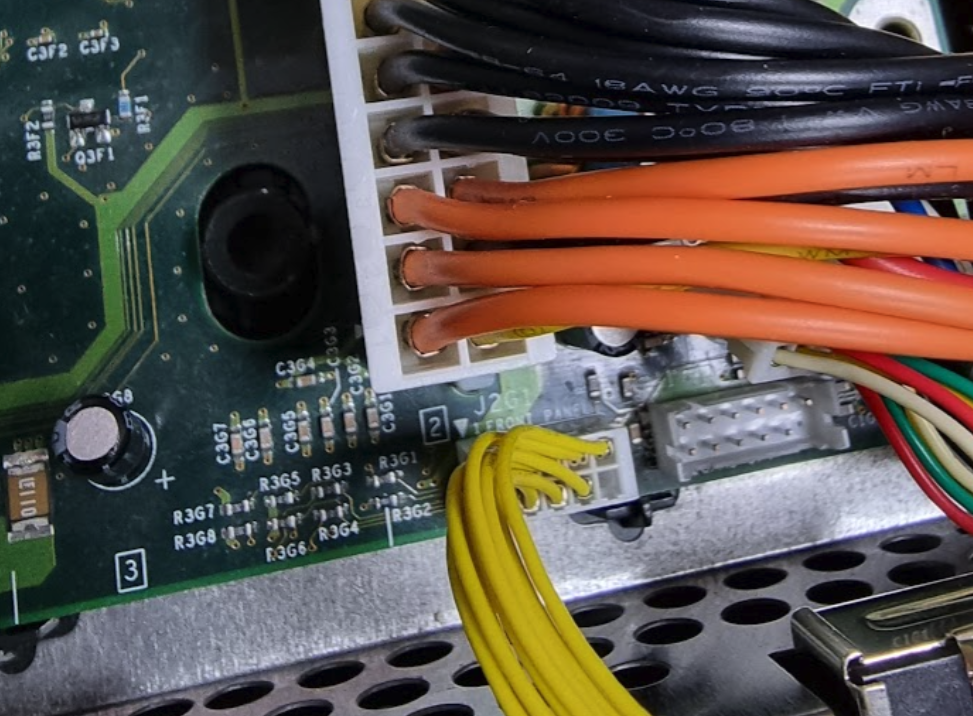 The yellow 12V rail should also be enabled and start outputting voltage, along with the red 5V rail.

To come out of reset the SMC/motherboard needs to be working and provide the 3.3V signal to the Power On pin. If this is not working the other rails will never come up.

You can use a basic voltage divider off the orange 5V rail to trigger the power supply to fully juice up all rails regardless of the SMC for testing purposes if you like. Place a 1k resistor between the Power On pin and ground, and a 4.7k resistor between the 5V rail and the Power On pin (make sure to do this with the power off, and make 100% sure the connections are good.

﻿If the 1k resistor is not installed correctly you will be sending 5V directly into the 3.3V rail potentially damaging something.﻿

Make sure to connect the fan next, and when pressing the power on button the first thing that happens is the case fan starts to spin. This is even before you get LEDs on the front panel. 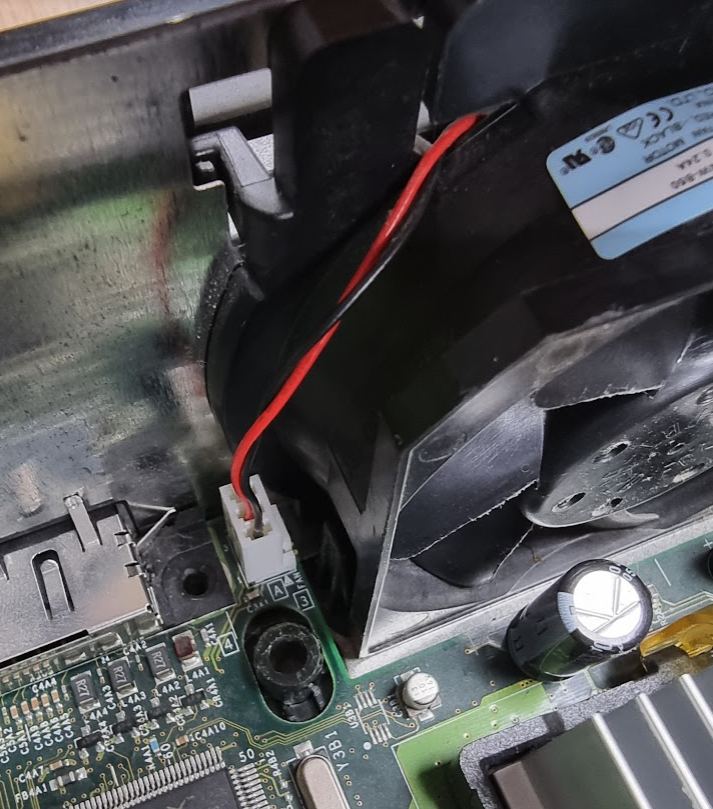 This is a good first indicator of power getting to the system and the power supply working. If you get fan spin, it is highly likely your power supply is good.

If you do not get fan spin, put your multimeter on the bottom right pin of this N FET transistor and press the power button. If you do not see 5V appearing even momentarily then the N FET might be bad. 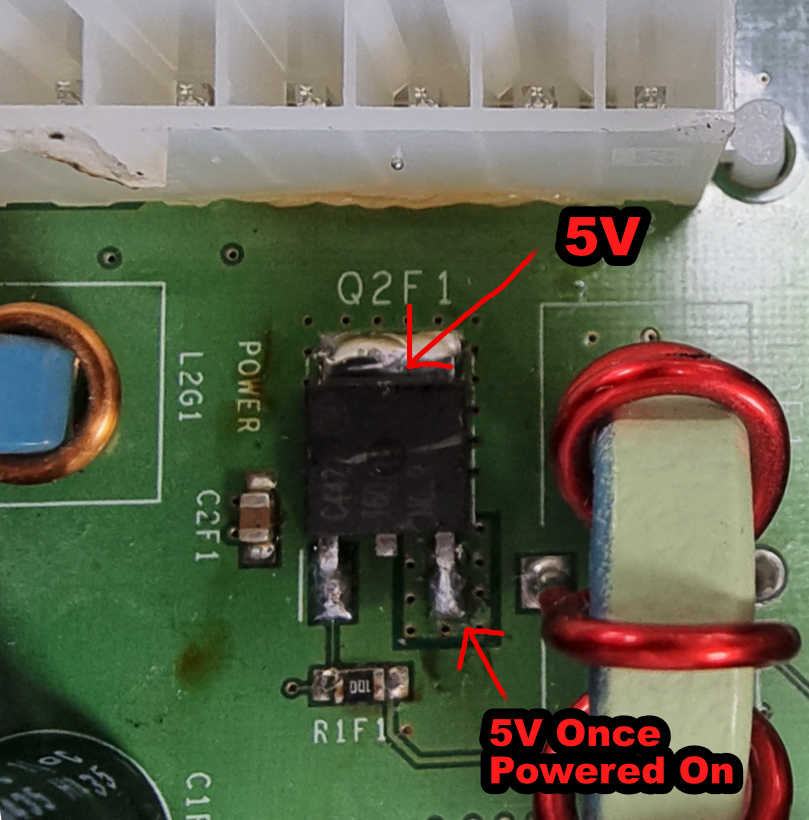 Double check the top middle pin of the N FET with the console in standby and this should have 5V. When powering on, this N FET passes the 5V through to the bottom right pin.

Updated 05 Jan 2023
Did this page help you?
Yes
No
UP NEXT
System Management Controller (Xbox Original)
Docs powered by archbee