The very first job of any Game Gear repair has to be a full re-cap (or at least a decap; removing the aluminium capacitors) as they were manufactured faulty and all Game Gear capacitors will leak and fail over the time.

We offer full recap kits that work on all versions of the Game Gear console.

Apply solder again to the capacitor legs and now as you are warming both legs of the capacitor up by moving the iron side to side over both pins, left off the capacitor with tweezers. Place the new capacitors of the correct size in the locations shown here. 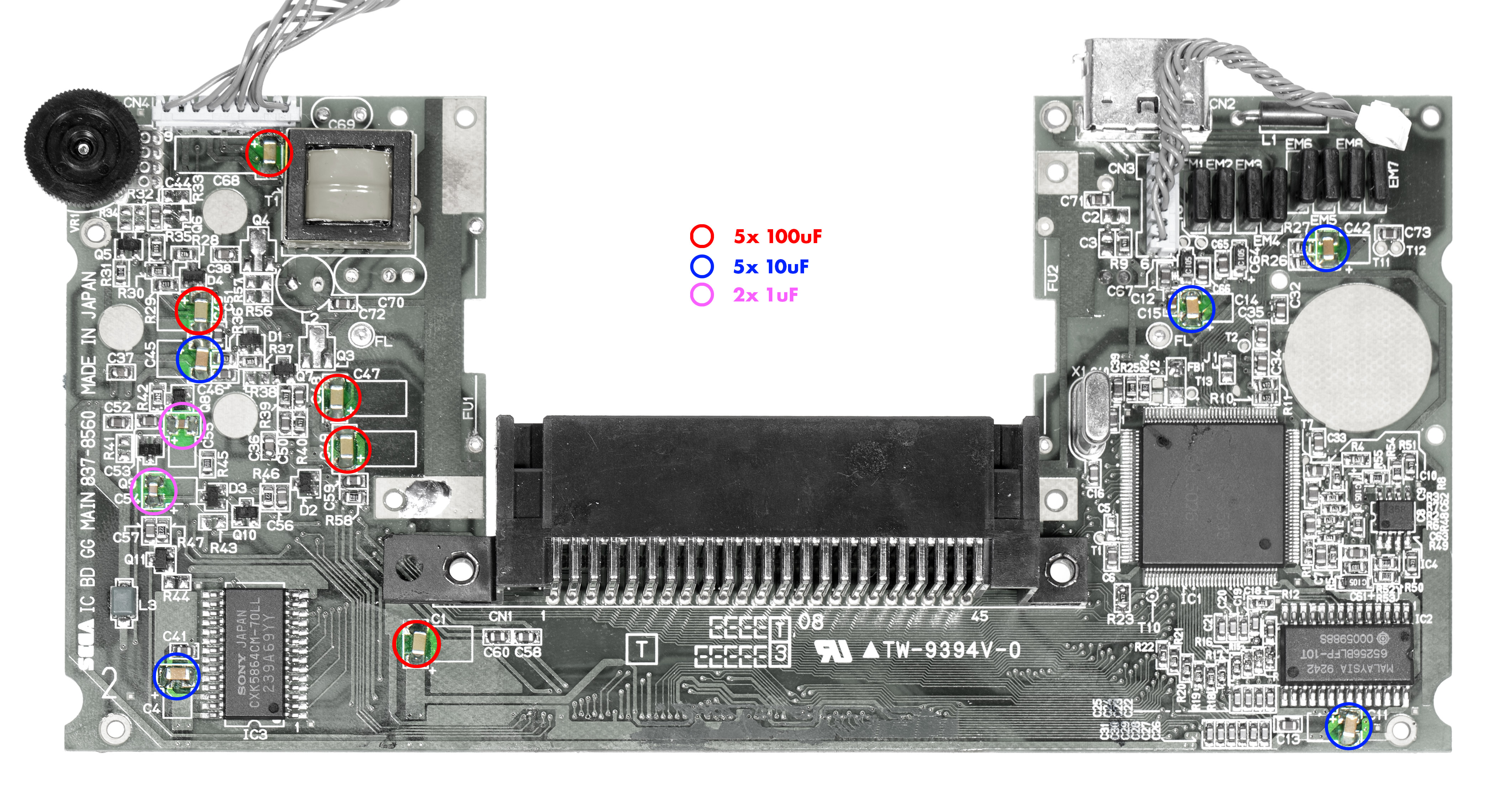 The only capacitors you need to remove are the ones in place of where the new capacitors go. If your board has two chips at the bottom left, then use these locations/values. 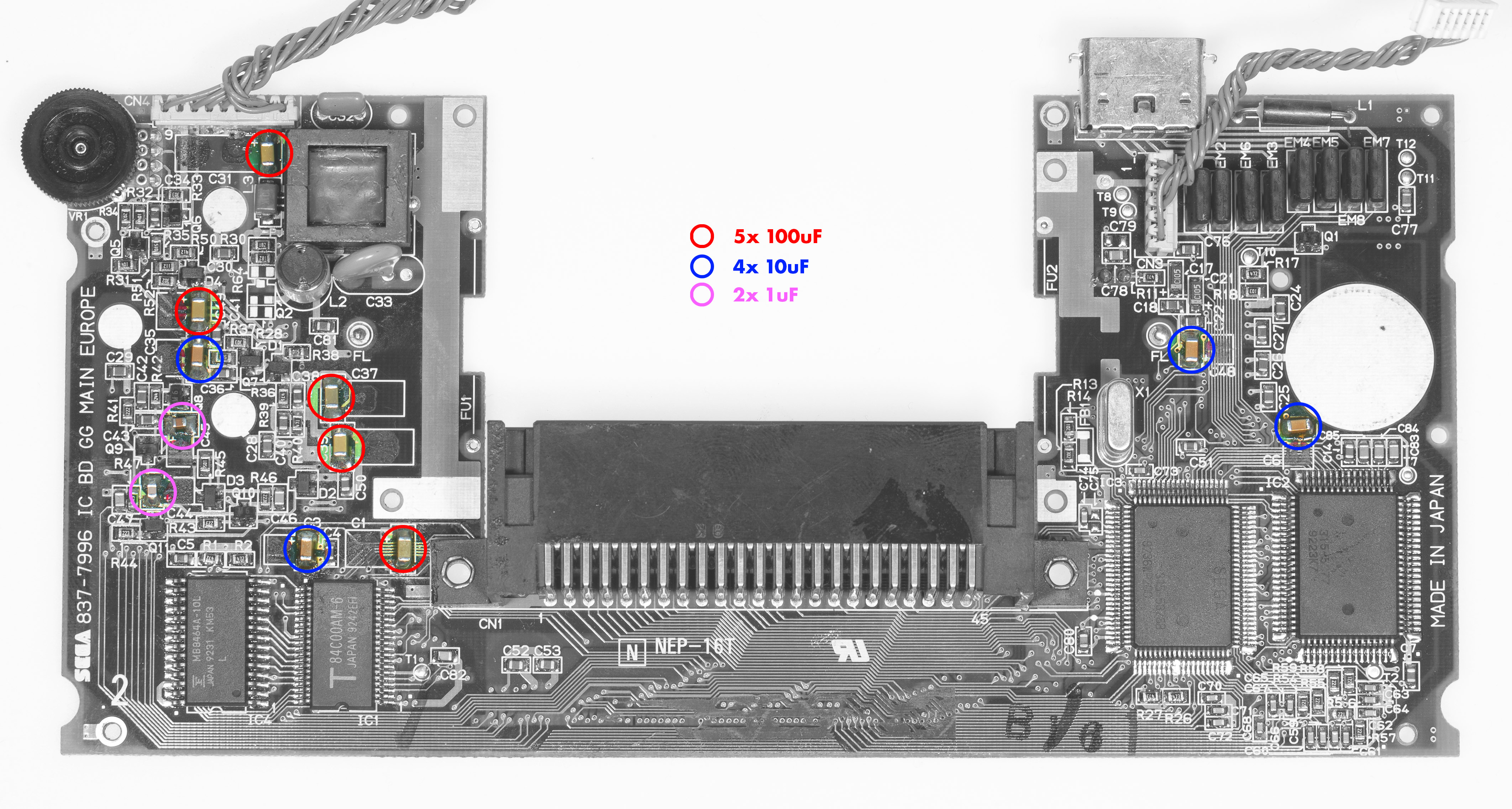 Note the new capacitors can be installed either way around, they are not polarized.

Next up do the same thing for the audio board. Remove the old 5 capacitors, and swap all 5 of them for the capacitor size shown. 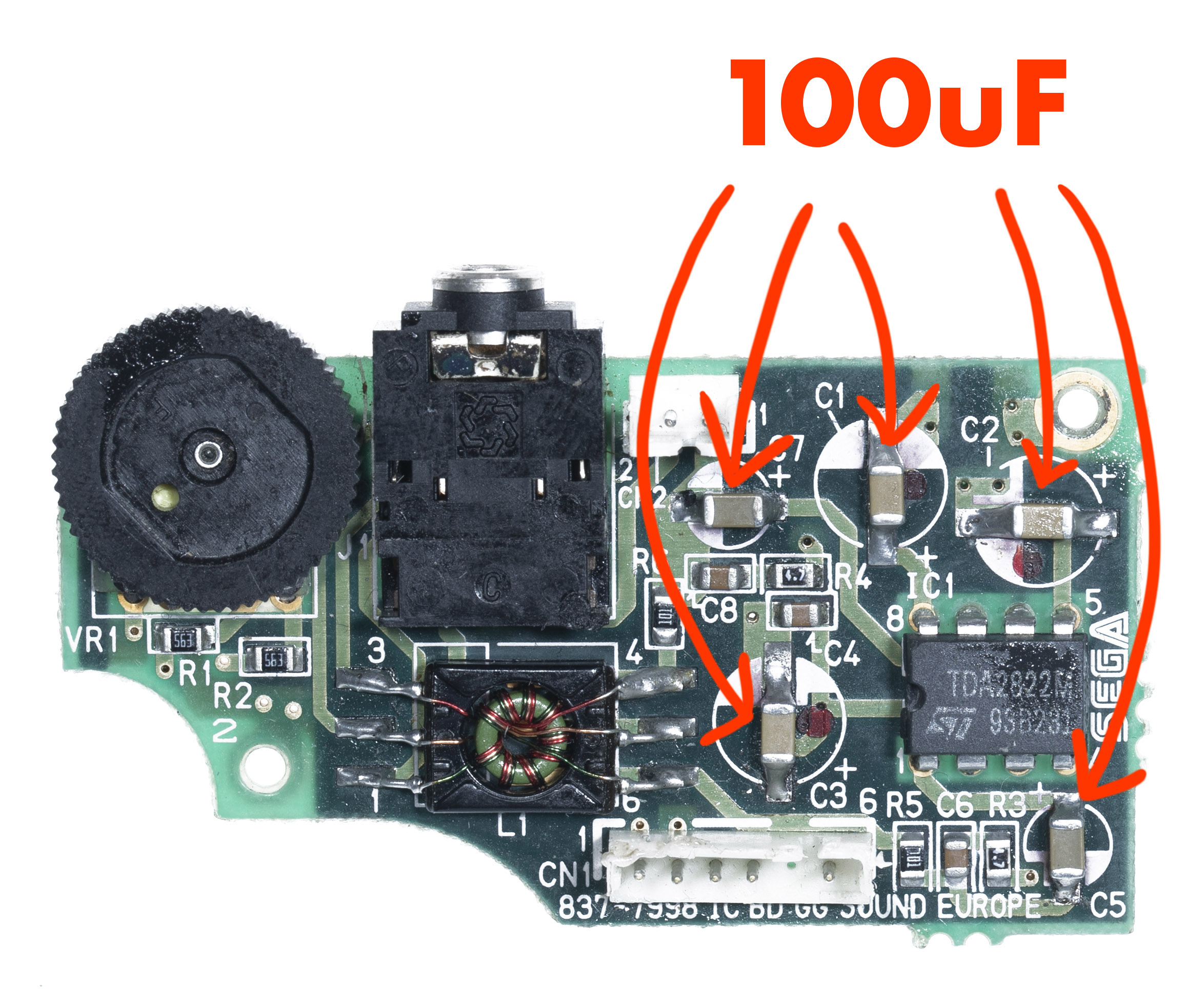 The power board needs the 3 large aluminium capacitors replacing.

Desolder the old ones, and install the new ones. Use a desolder pump and flux to clean the holes where the old ones came from (we sell them). 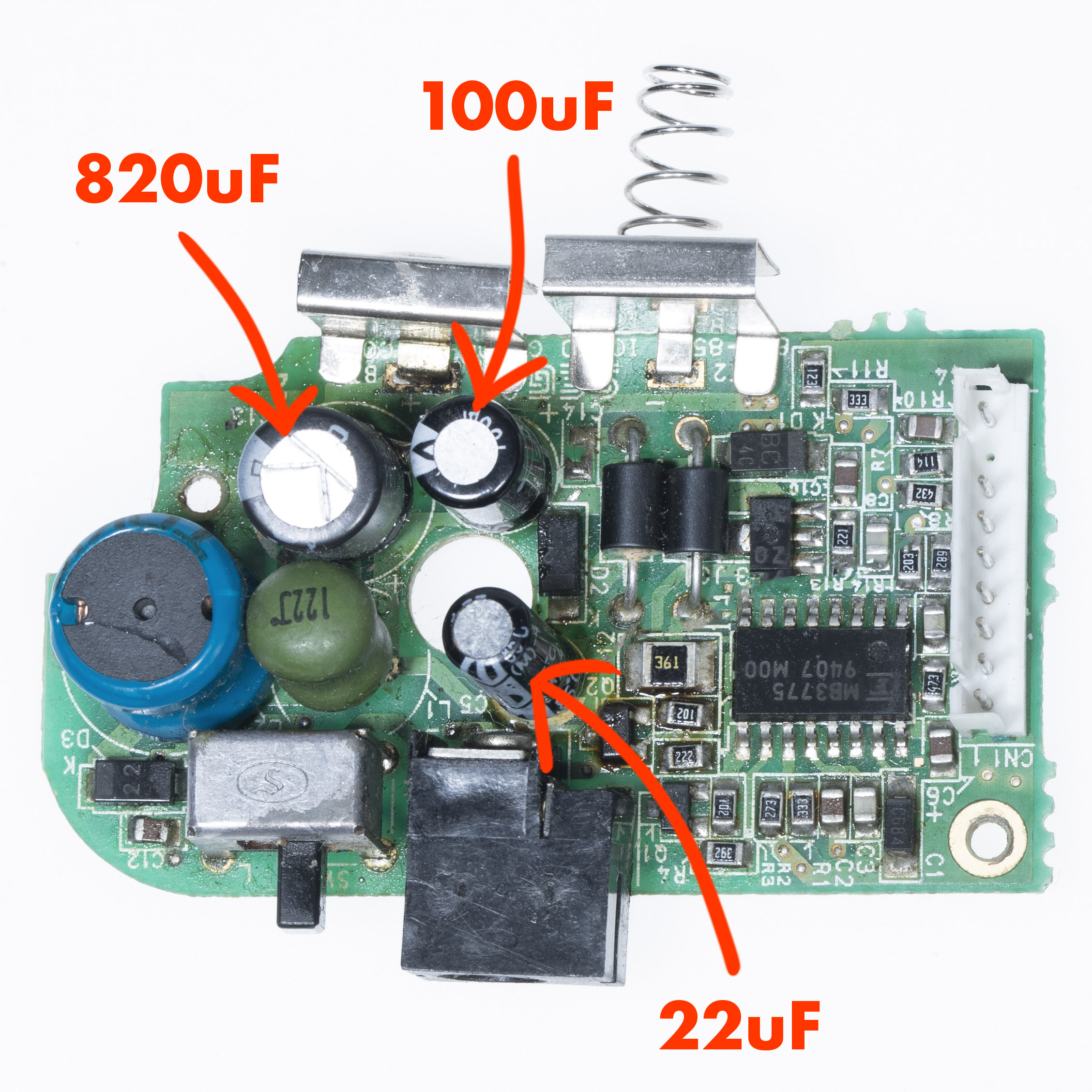 Once done make sure the power from the power board works by checking the voltages with a multimeter (we also sell those). 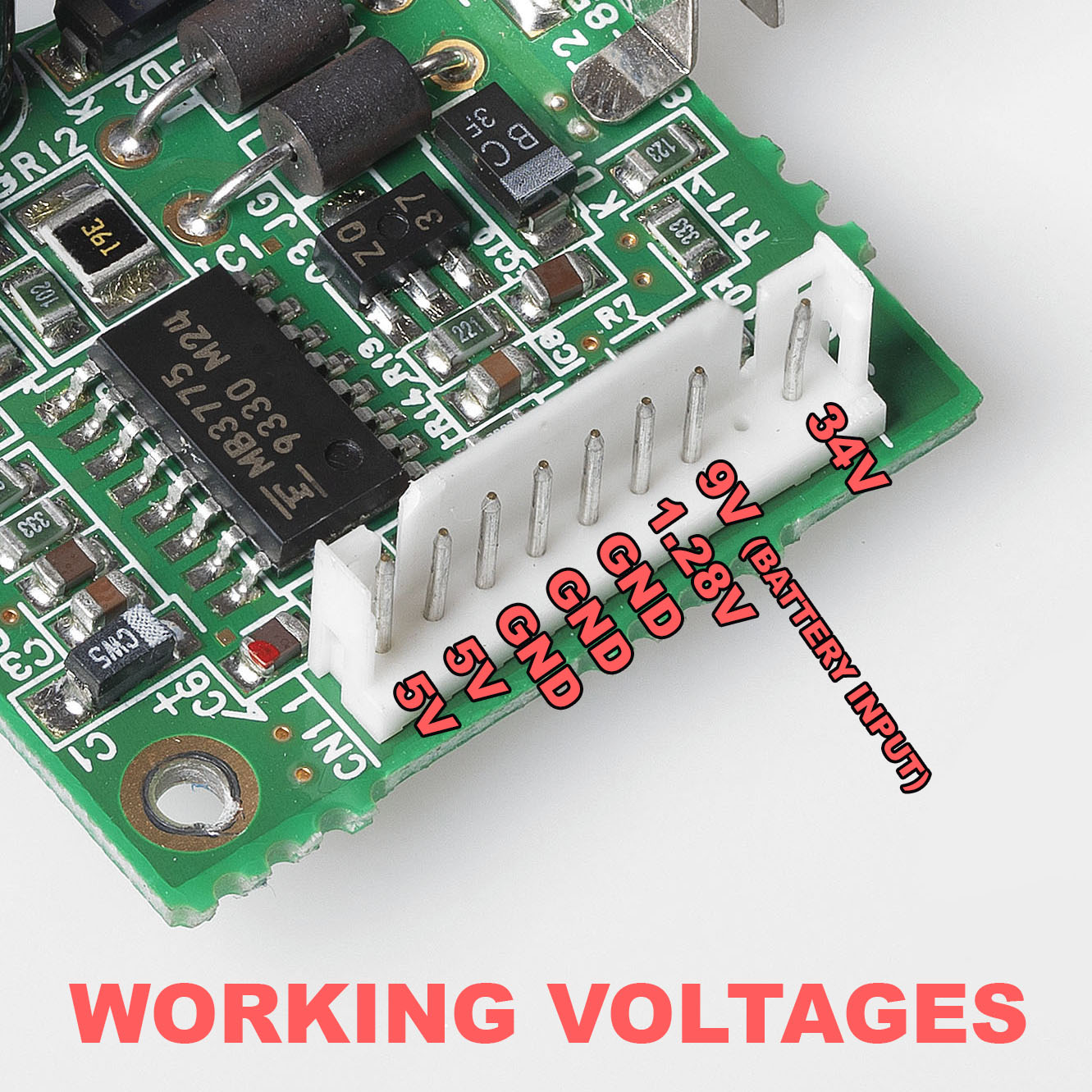 If you don't get those, you can buy our Game Gear Power Board Repair Kit or a CleanPower or CleanJuice power boards. 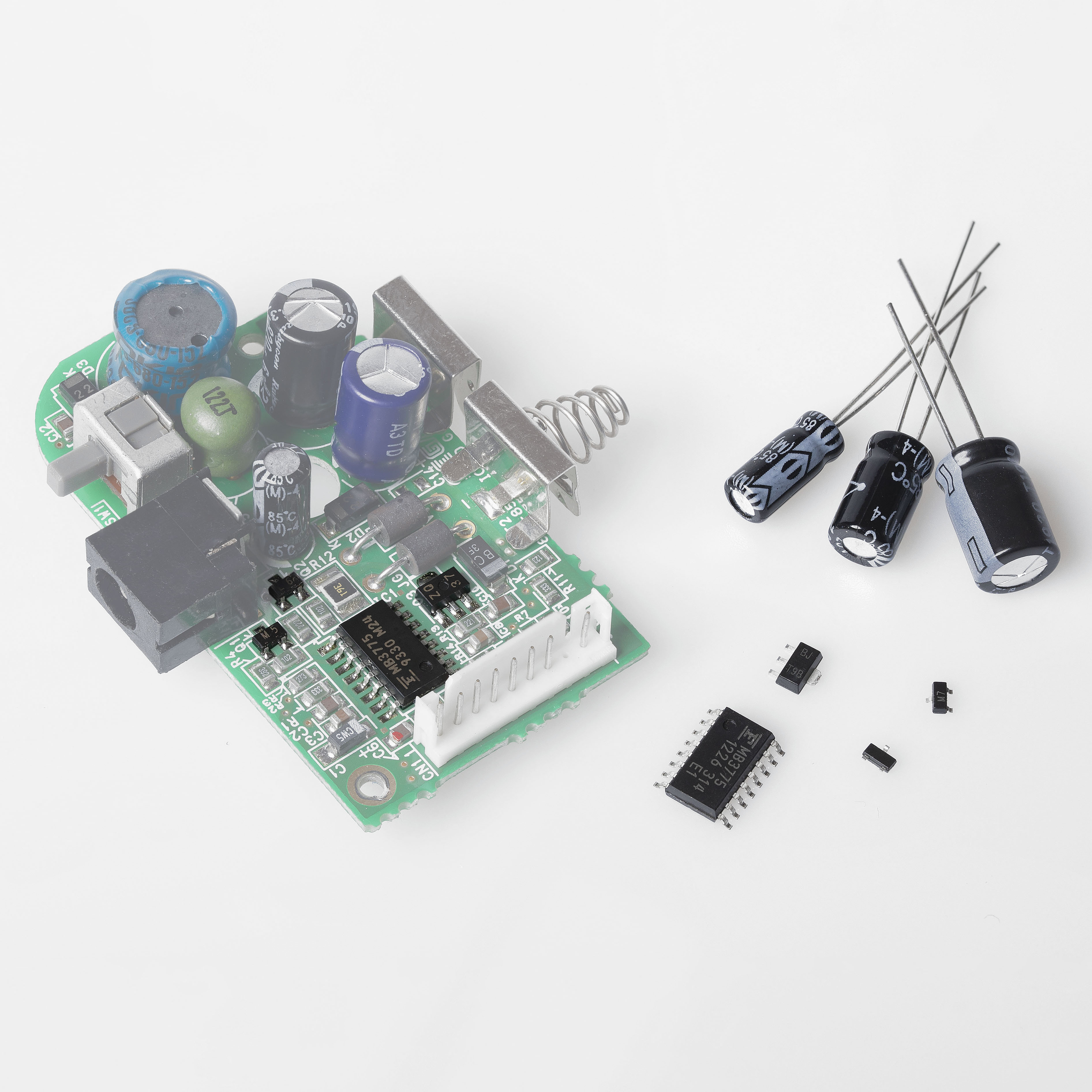 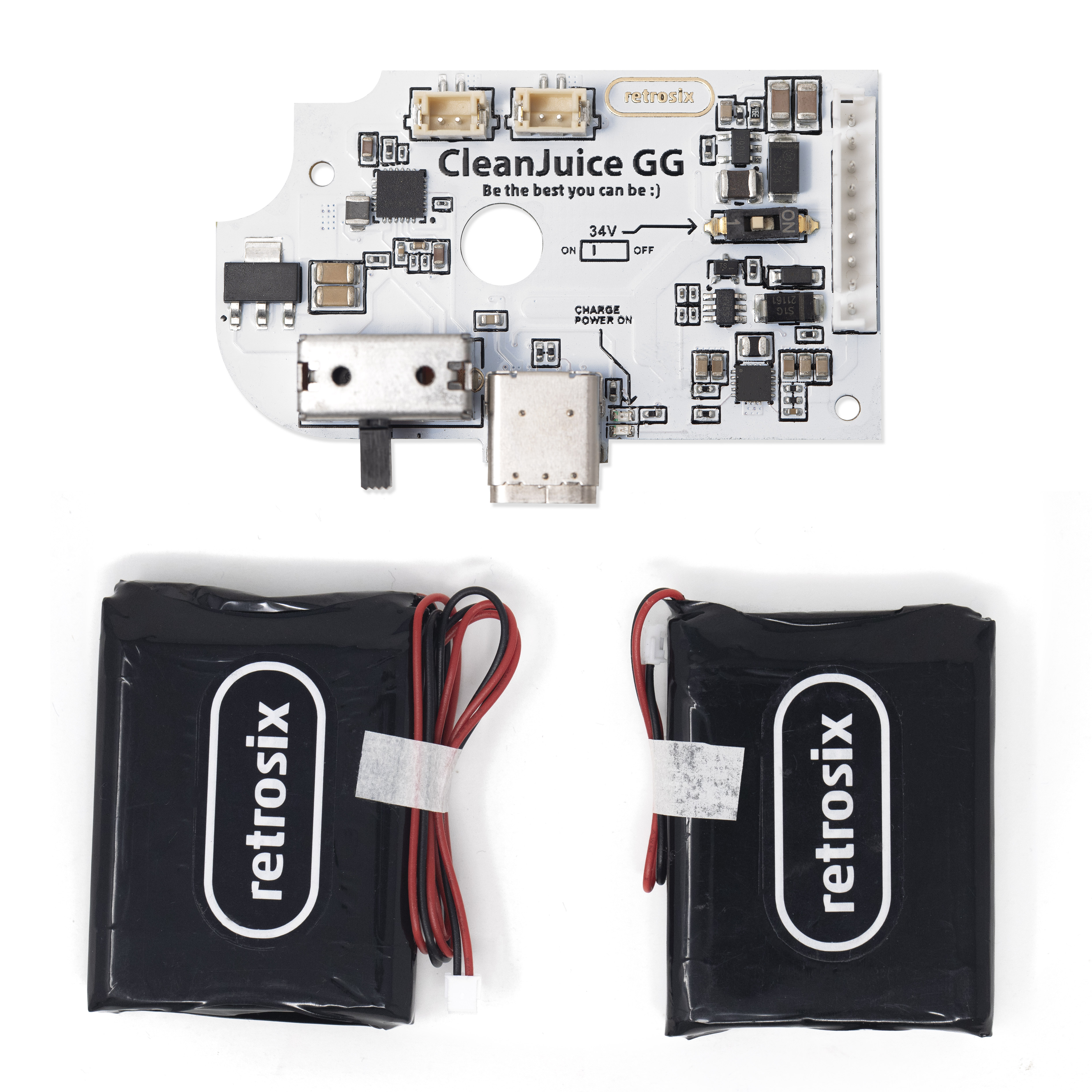 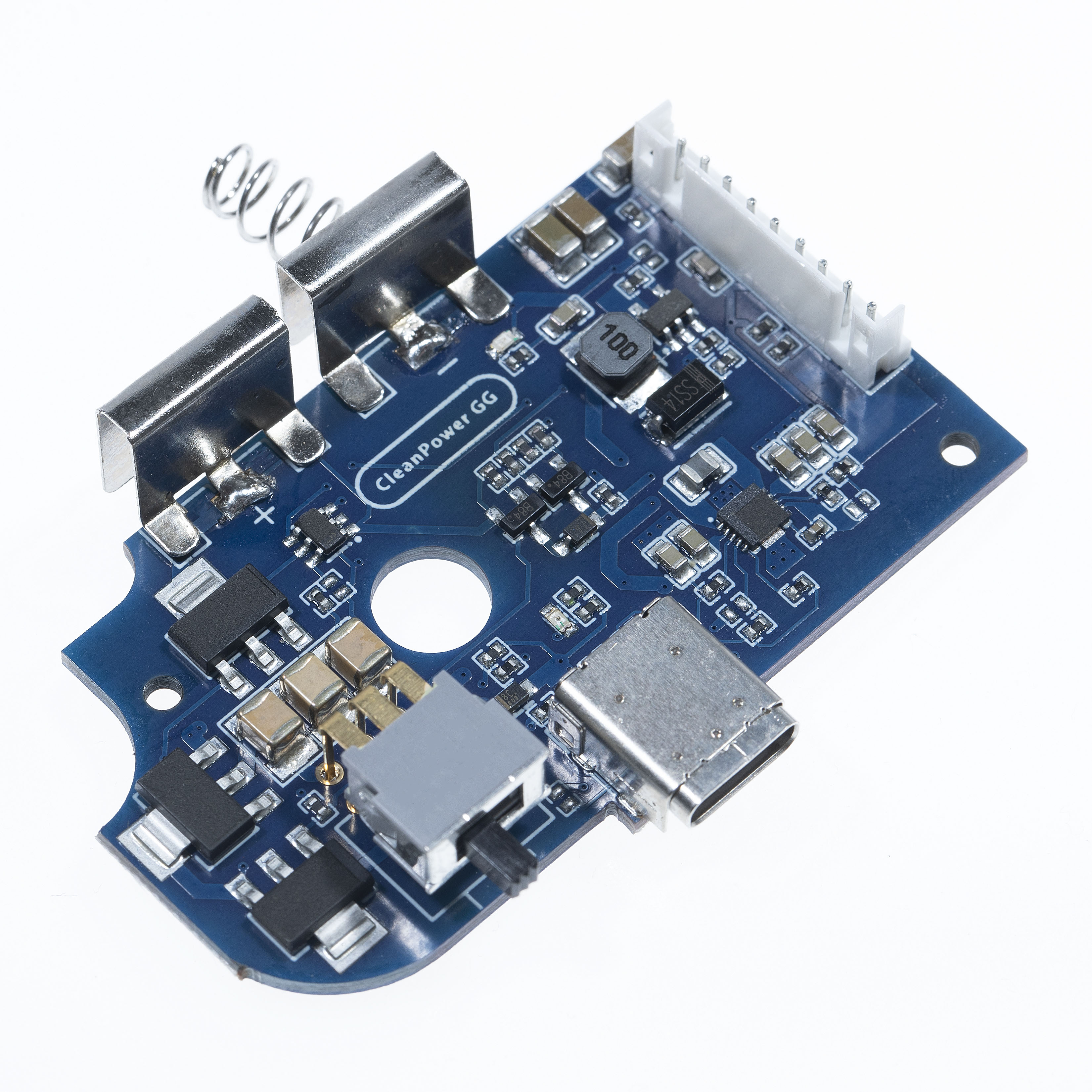 If your power board doesn't output the right voltages nothing else will work. Get it working with capacitors and or the power board repair kit. Failing that just upgrade to a USB-C CleanPower Game Gear.

If your audio board does not work, it could be the speaker, or the audio board. You can replace both from our store. We sell both the speaker and the CleanAmp for the Game Gear.

Finally, if your main board still fails to work, there are a few things. If the board powers up and the red light powers up and then turns off and the console shuts down, its a sign that the power regulator cannot maintain the reference voltage, or not even provide it. That is a sign of a bad power board, or a possible short/fault on the main board. Check you haven't got any shorts on the board, and try turning down the brightness wheel fully. If turning up the brightness wheel stops it working but it works when down, you have a faulty mains voltage transistor or bad fluorescent tube. I would recommend upgrading to our Game Gear CleanScreen.

If the Game Gear powers on and the red light stays on, try a game and turn up the audio. If you can hear the game running but no screen, then the screen IC could be dead. It's a good sign the rest of the console is working, and again the recommendation would be a screen upgrade.

Updated 04 Sep 2022
Did this page help you?
Yes
No
UP NEXT
Schematics (Game Gear)
Docs powered by archbee

TABLE OF CONTENTS
Audio Board
Power Board
Troubleshooting