The very first starting point to confirm is operational and not faulty is the VSYS rail that comes out of the BQ24193 charging chip.

If this rail is shorted by any other part of the system, it can overheat and kill the BQ chip or any other chips, so it is best to start by confirming the BQ output VSYS rail is free of shorts. 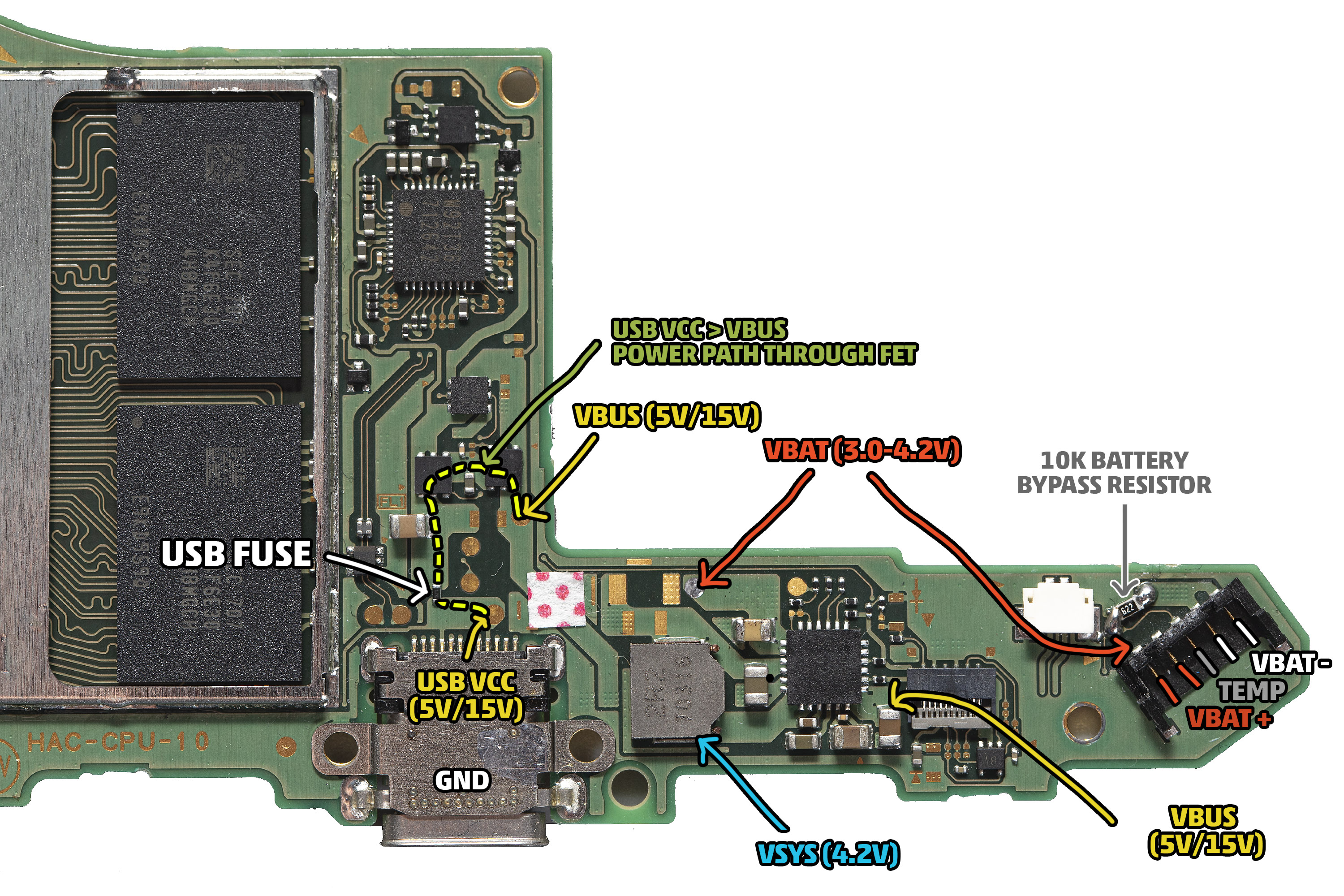 NOTE: Once we come to power the Switch from a bench supply at the battery input you will need to install the 10k resistor as shown above. Until then, you do not need to install it.

In order to test the main VSYS rail has no shorts that could damage the BQ chip we want to:

Injecting VSYS and testing for shorts

Now you have the wires attached to the USB shield and the bottom of the inductor, set your bench power supply to 4.2V, and current limit of 1A. 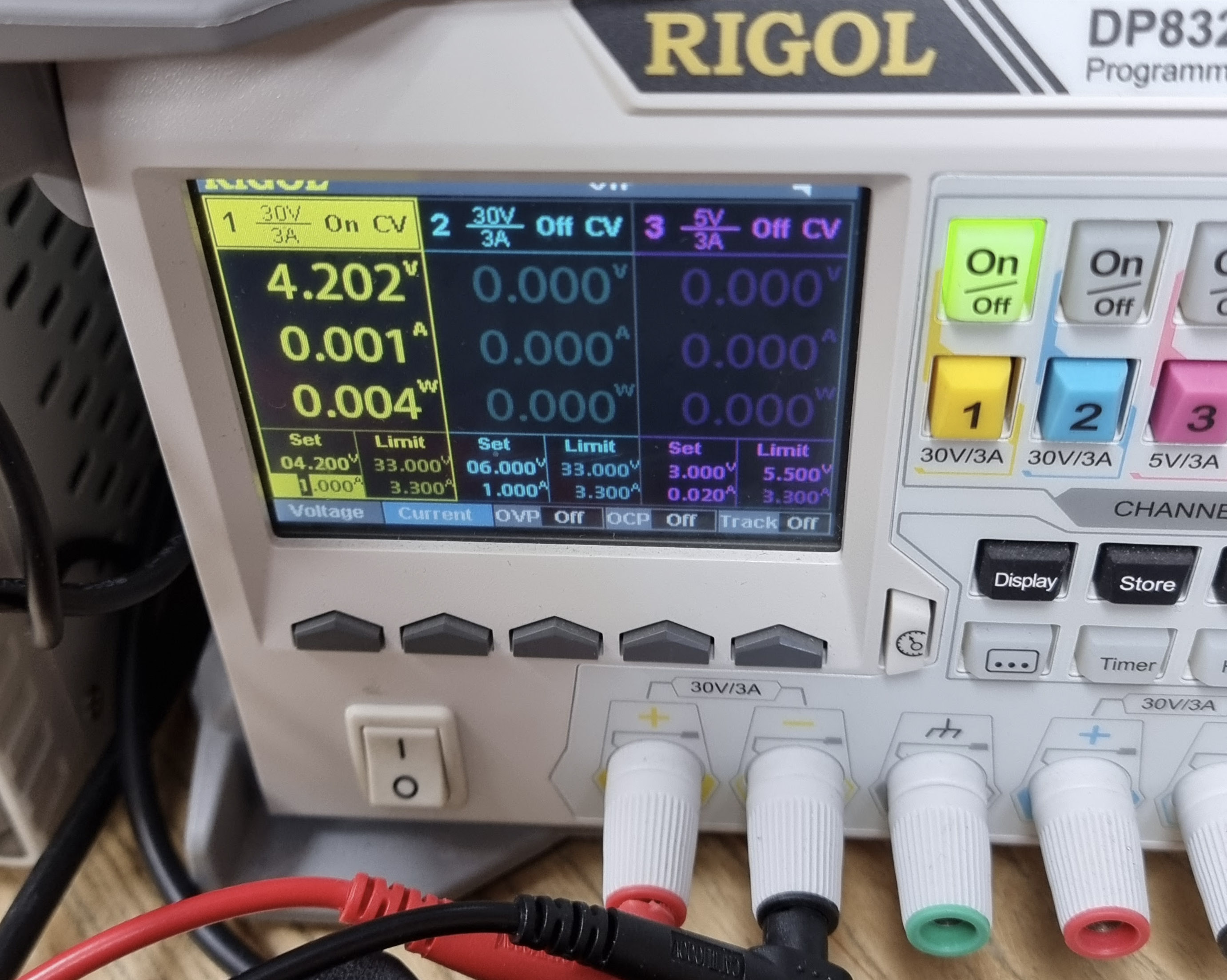 Make sure you have the wires the correct way around (ground on USB shield, positive on VSYS) and voltage is set to 4.2V before you connect the leads up to the system. If you accidentally set the wrong voltage on your bench supply to 10V for example you could kill your switch. 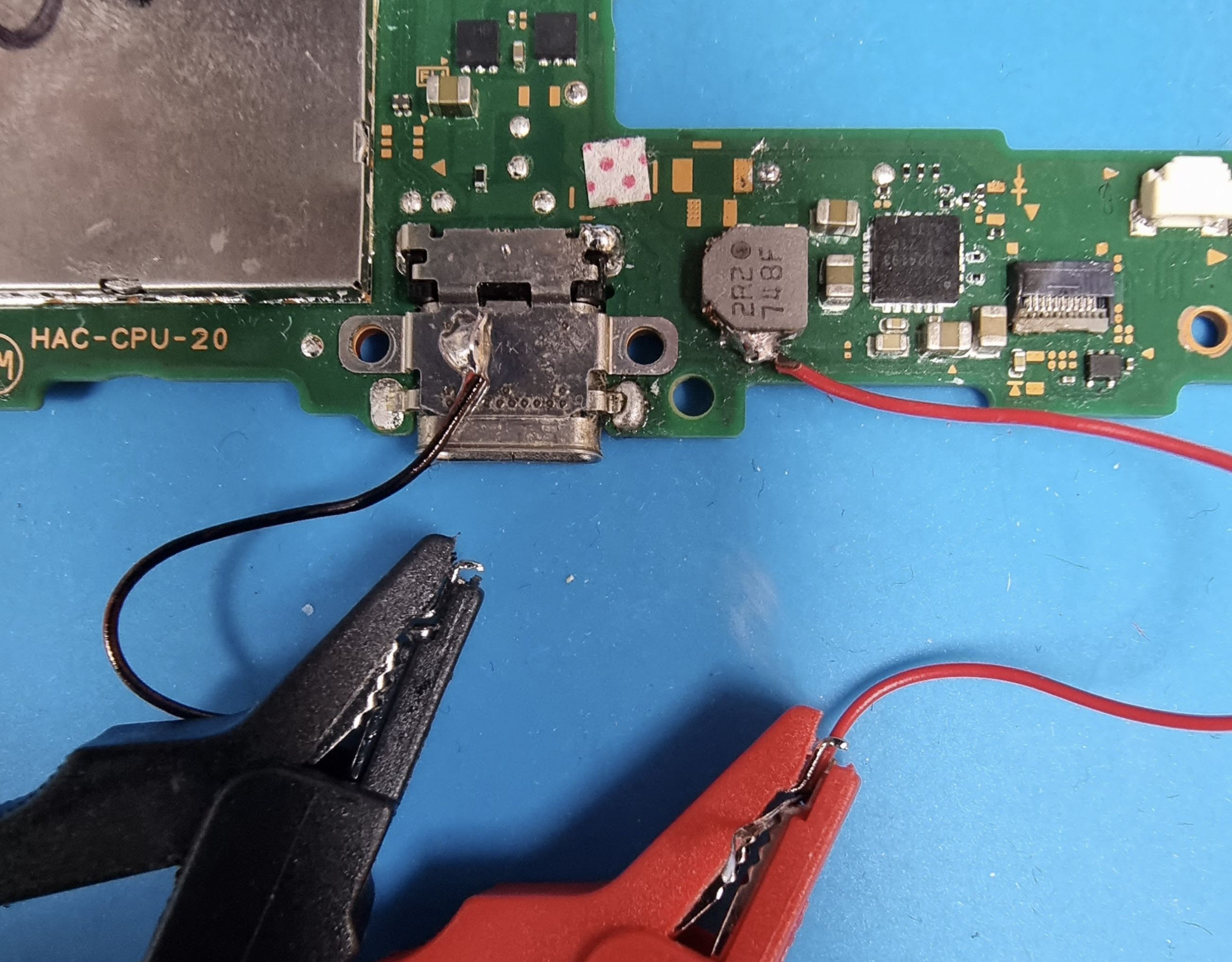 If you get a short here or higher power draw, get out a thermal camera and start looking for where the short is to fix it. A short at this stage (nothing powered on) is usually the BQ chip dead, but use a thermal camera to find the failing component properly.

A﻿s well as the MAX77620 there is also a stand-alone 3.3V regulator that is part of the first-stage boot, and if that fails to bring up the 3.3V rail, will prevent second stage boot. It is labelled ENxx and is above the audio IC.

This test will be a very good check that we have no shorts anywhere in the system.

To test all of the first-stage boot rails mentioned above, we simply need to attempt to power on the console while we still have the 4.2V VSYS voltage injected on the inductor.

To turn on the console use the power button ribbon that is at the top of the motherboard next to the CPU fan connector, or easier just short out the pin 1 and 2 together with tweezers. Do not worry about shorting the other pins 3 and 4 as well it won't harm anything. These pins are just power on, volume up and volume down pins that get shorted to ground (pin 2) when pressed.

Touch your tweezers between pins 1 and 2 (do not apply much pressure otherwise you could bend the pins) and watch your bench power supply. Your bench should show the power draw increase as the system attempts to boot. 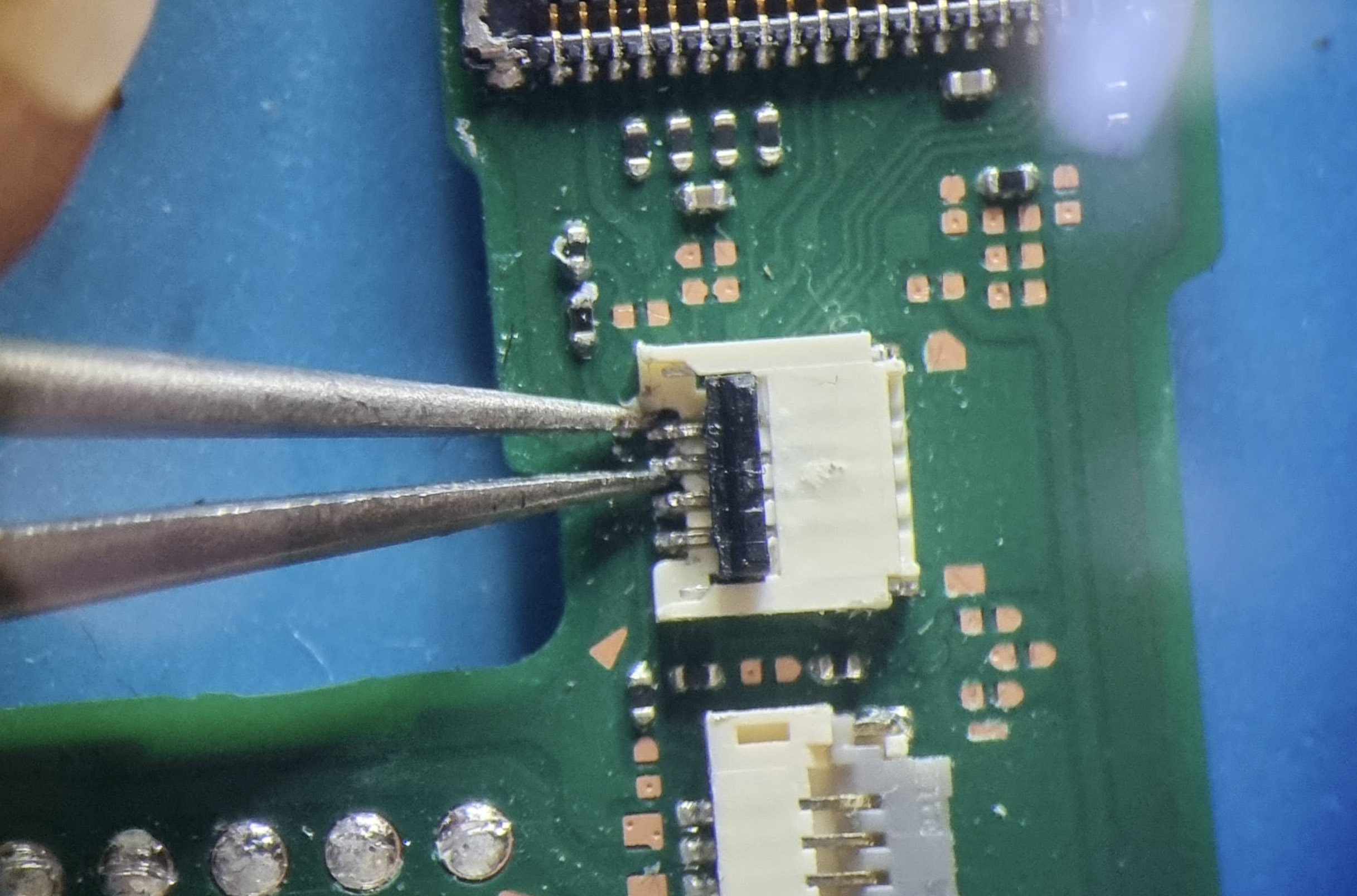 Turn On With Tweezers

Once you short out pins 1 and 2, this low voltage signal will go to the MAX77620 which has a "soft-boot" feature which turns on all the internal regulators on the chip, bringing up the voltage rails.

The current on the bench should read around 195mA (0.19A). Sometimes the Switch will send a turn-off signal back to the MAX77620 as it will fail to read the battery level from the BQ chip over I2C (as we don't have a battery connected). 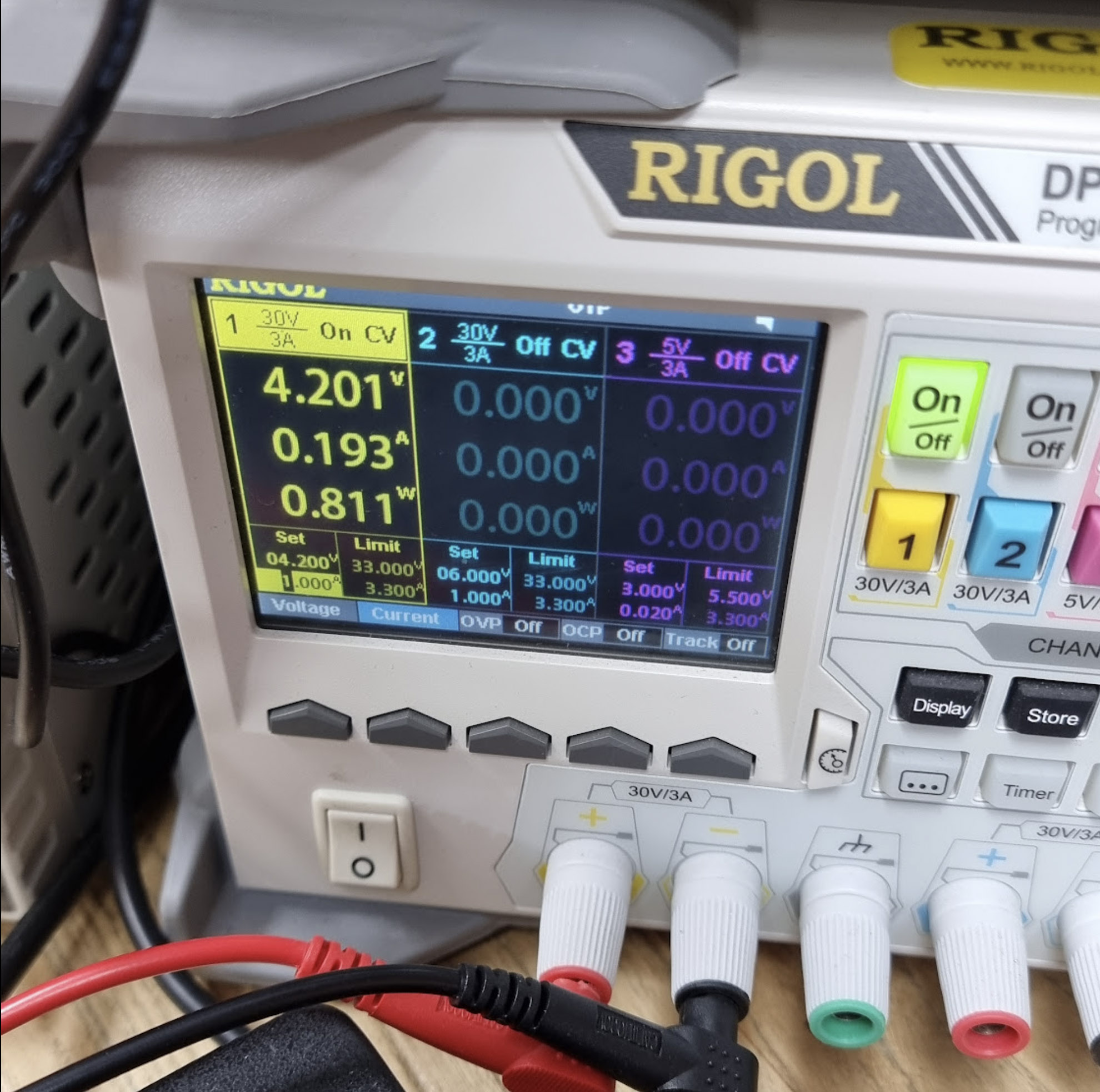 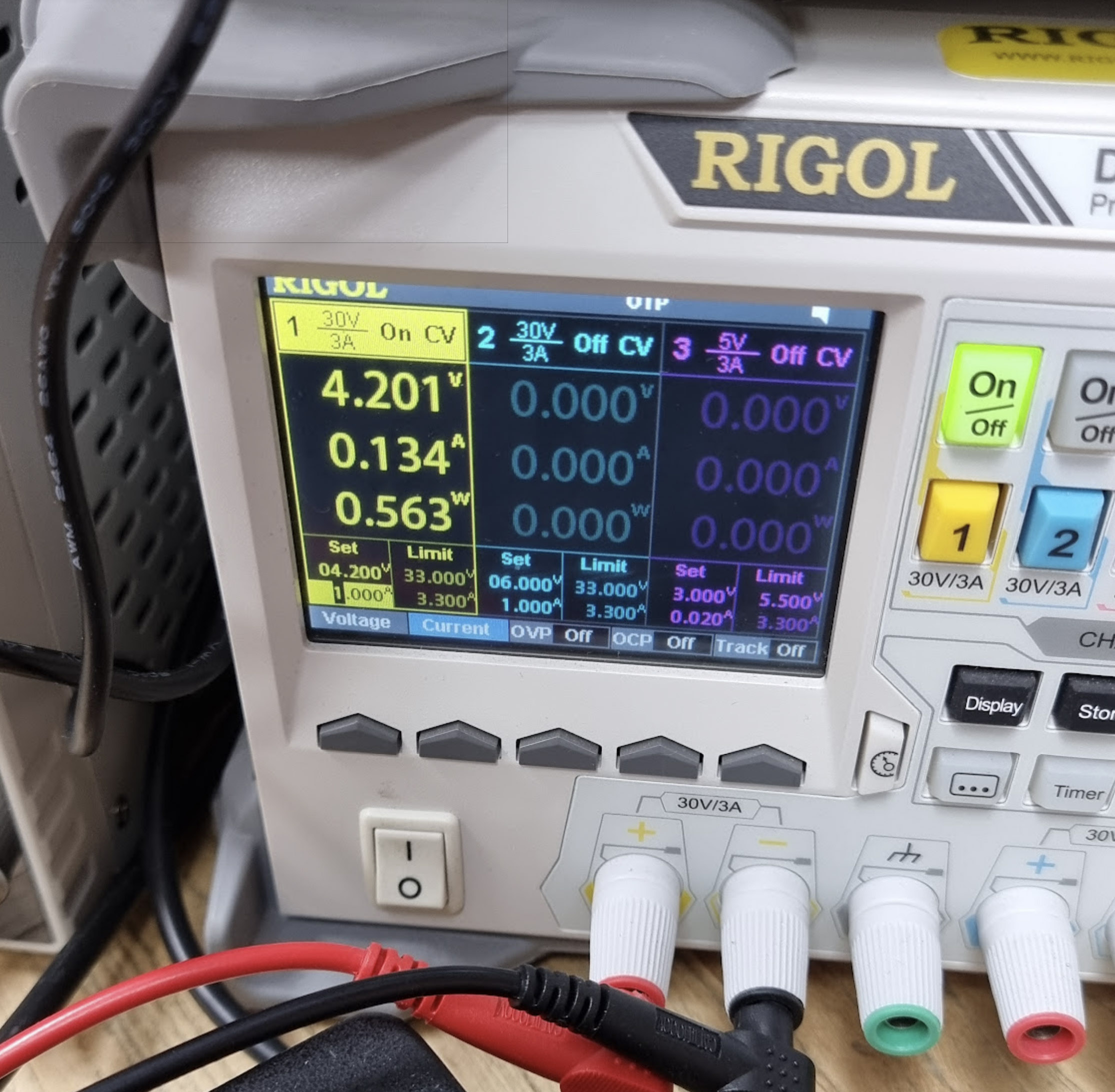 If you have any shorts on your CPU, RAM, MT92T36, P13USB, Audio, and many other small ICs and components on the board, your current draw will be much more and you can use a thermal camera to find out where the issue is.

If the two steps above of injecting 4.2V into VSYS and turning on give the same current readings as mentioned, you are good to move on to the next step of confirming the battery charger IC is working and checking for second-stage boot shorts.

If however you got more or less current (usually 0A or complete short-circuit) you must fix them before moving on.

If you have a dead-short then use a thermal camera to find the source of the short and replace the damaged components.

If you have no current draw when turning the console on with the power button or tweezers, it is a sign your MAX77620 chip is faulty as that should draw power send send it to every part of the system.

Either that or your power button FPC, traces or current limit resistor on the pin 1 power signal going to the MAX77620 is damaged.

It is almost always the MAX77620 in this case however as unless the console has had some specific damage to the connector or resistor those would not typically fail under normal use.

We will cover checking the individual power rails and the MAX77620 in more detail in the steps later, however if your power draw is nothing, then its almost definitely a faulty MAX77620. To fully confirm this check the steps later on for confirming correct MAX77620 operation before replacing. 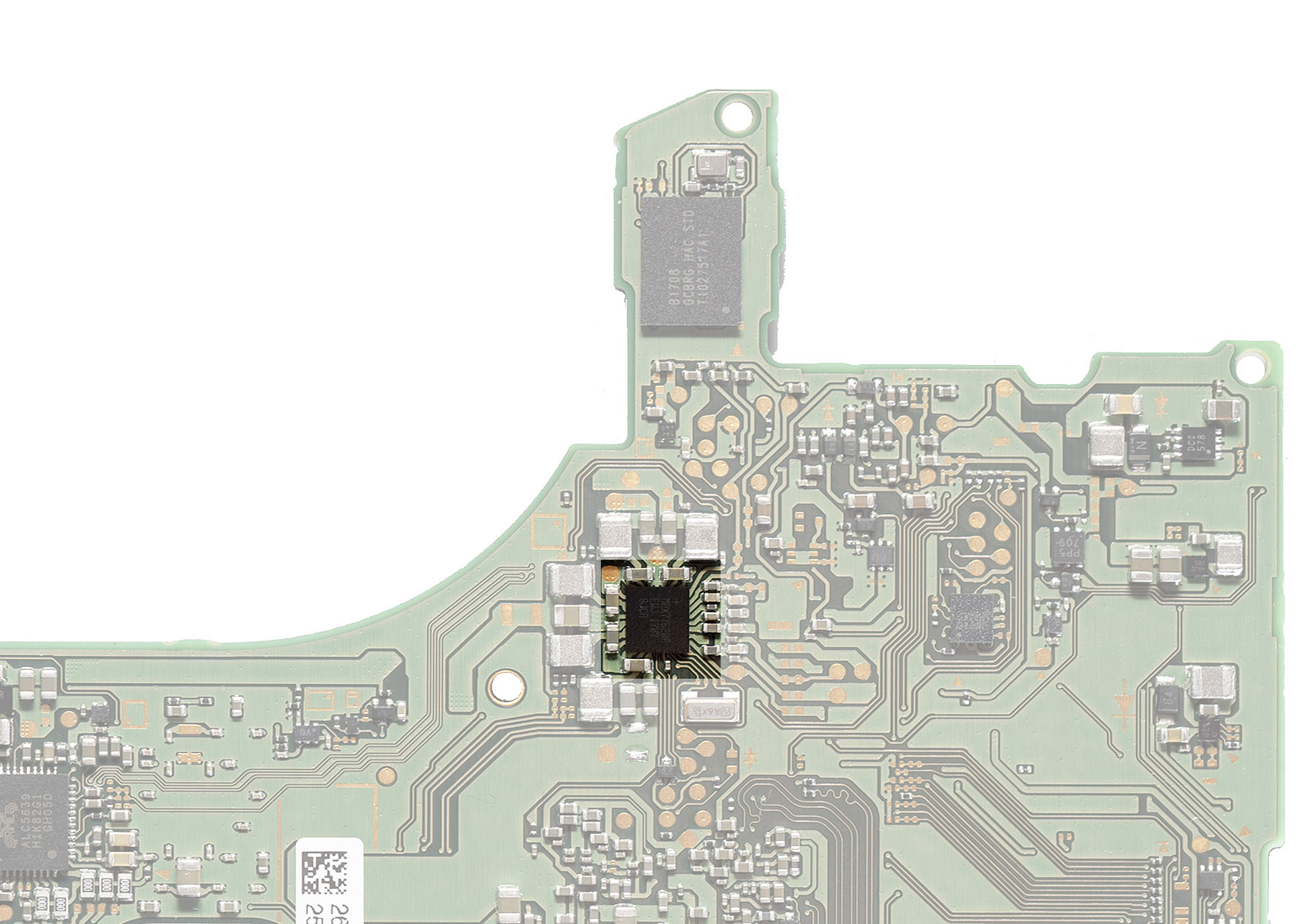 I﻿f you find the boot power draw is stuck between 100 and 300mA you often have a stuck first-stage boot.

M﻿ake sure all power rails from the first-stage boot of the MAX77620 regulator are good.

I﻿f all those first-stage voltages are present, next check you have the 3.3V rail coming out of the 3.3V regulator. If not, make sure the P13USB and M92T36, the audio IC and other components on the 3.3V rail are not shorting out the rail.

If all of those are good, check using an oscilloscope that you see eMMC activity. If you see activity on the data pins you have a good MAX77620 and good 3.3V regulator as the eMMC won't give activity until then.

Updated 05 Sep 2022
Did this page help you?
Yes
No
UP NEXT
3.3V Regulator Checks
Docs powered by archbee