The Game Boy Advance SP is known to have the most audio noise of all the Game Boy consoles. Many people believed it was the amp on the GBA SP itself that was noisy. After lifting the original amp, reverse engineering it and hooking it up on a separate PCB and driving it with a clean function generator signal, I discovered just like the GBA amp, it can amplify the audio perfectly clean with no noise. The issue is the console itself making the noise.

As you add amplifiers like the CleanAmp, the noise is much worse, enough that it can really annoy people and be a distraction to the playing experience.

I decided to spend some time to fix this issue as nobody else has ever fixed it. The only other solutions were the wrong solutions, trying to filter out the noise be effectively removing most of the original sound using simple low pass filters. This is not the solution I wanted. I want the fix the cause, not mask it.

After solving the GBA noise issue, solving the SP noise issue was simple. I looked at the same components on the SP that are on the GBA and found a few things that are the same and some that are not. Here are the fixes to them all.

The volume slider is referenced to ground, and also fed into the amplifier on the GBA SP for adjusting the output stage. Any dirty in the slider which builds up can add feedback to the ground plane causing noise. The amount of noise this adds is not usually a lot, but its still worth fixing.

The power switch on the GBA SP is known to generate a black grime over time. It looks like copper oxidation if I were to guess.

Now remove the plastic power switch and notice the dirt inside the actual switch. 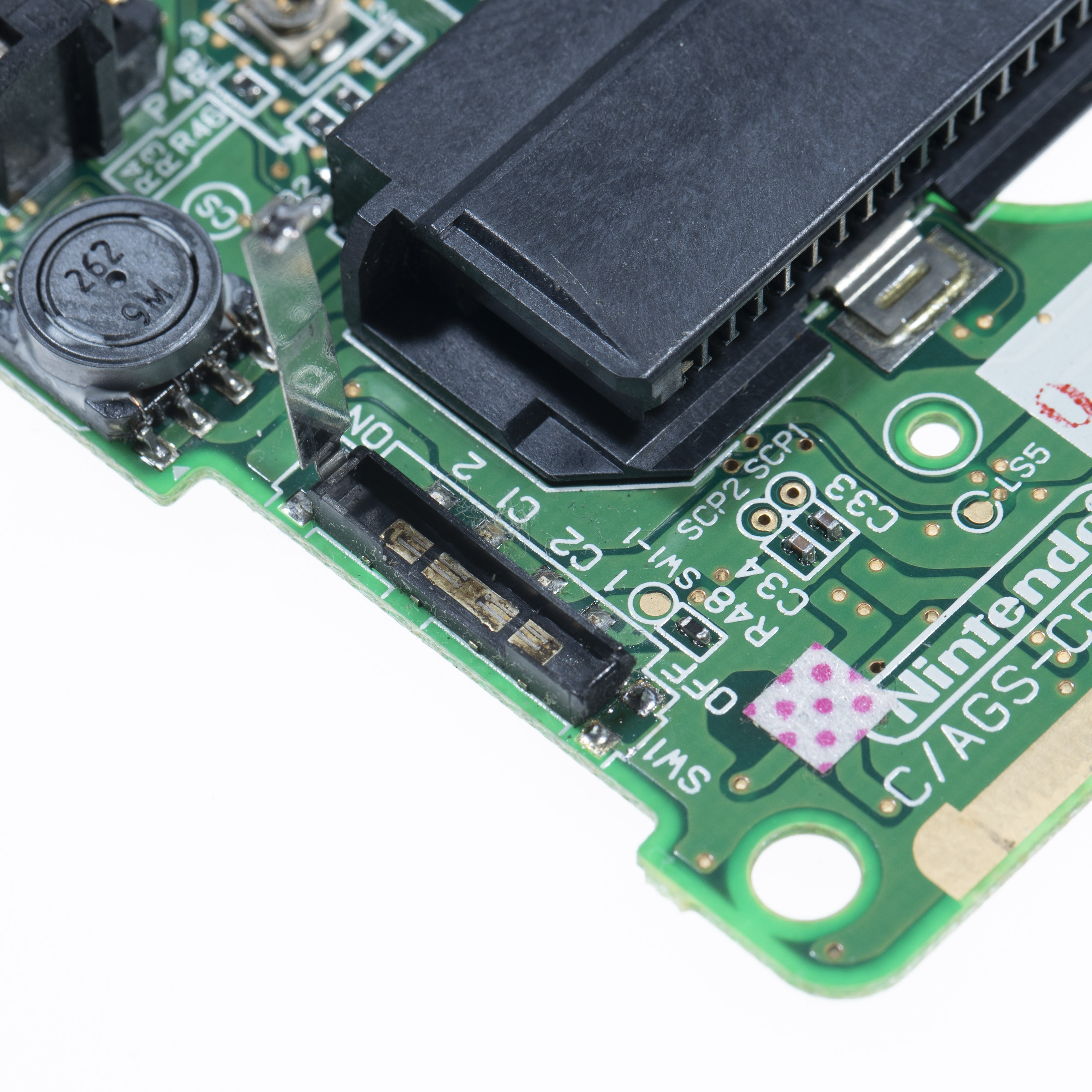 It should be perfectly clean copper/gold but its usually blackened. Drop some IPA in the switch, and using the tweezers gently rub sideways until the dirt comes loose. Use a cotton bud dipped in more IPA to rub the loose dirt away. Repeat once or twice. 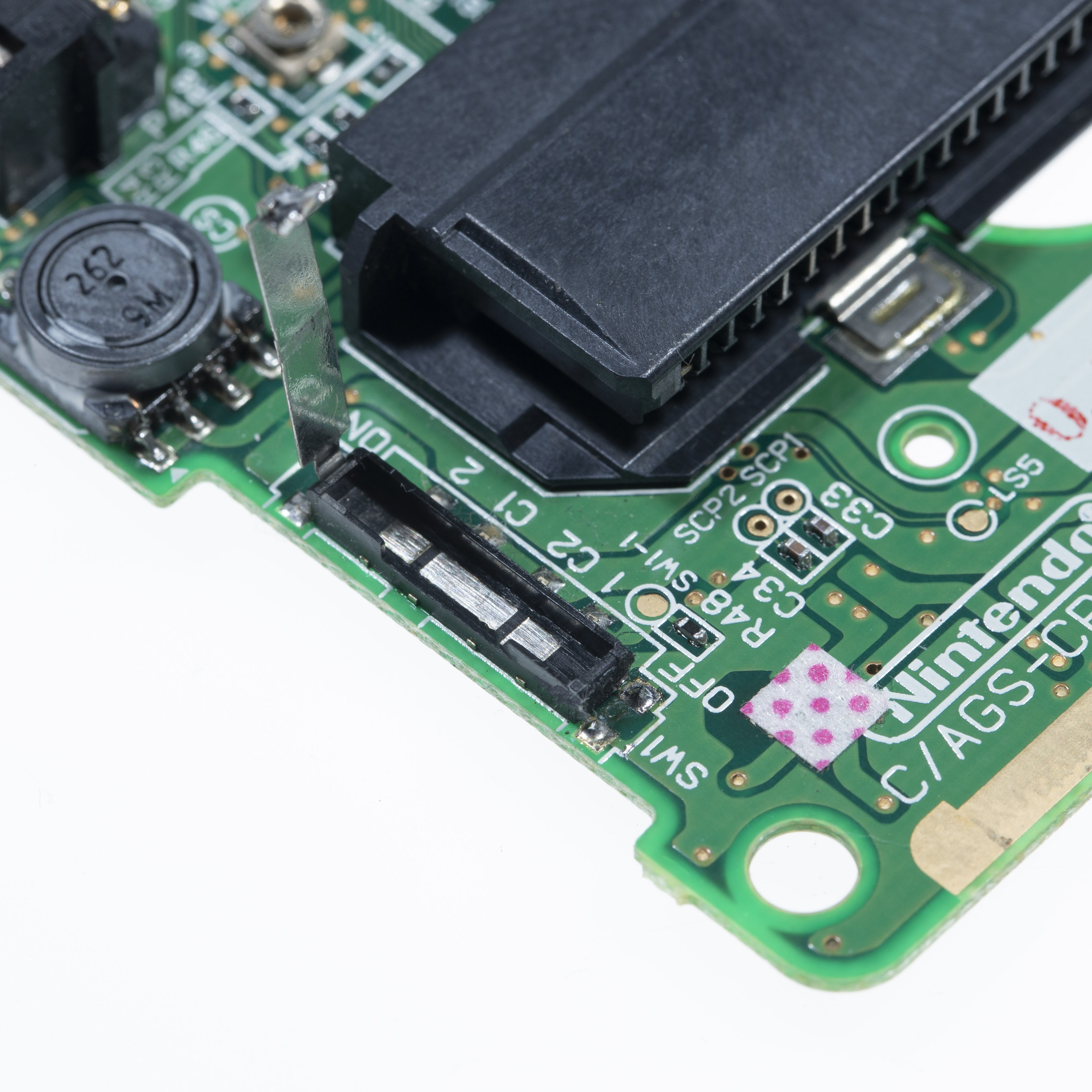 Place the power switch back into place and re-solder the metal cover back down.

This is one of two very loud noises on the system, and one that nobody has since managed to find the source of. After investigating, I found that the VDD3 power rail is very noisy. This is because it is shared with the SRAM and the CPU as well as other high speed lines.

The main cause of the noise is insufficient bypass capacitors near the CPU and SRAM, to supply the needed quick bursts of power. When a chip is switching fast, it needs fast current locally, that's the purpose of bypass capacitors. A lack of capacitance near the switching pins means the power rail dips and rises in and out of phase to the source switching, causing the noise. When systems don't have audio output its not always audible or noticeable, but on the GBA with it's audio output, its very noticeable.

This noise introduced by the CPU and SRAM cause the hiss (high pitched noise).

With this capacitor in place, almost all audible noise is removed. 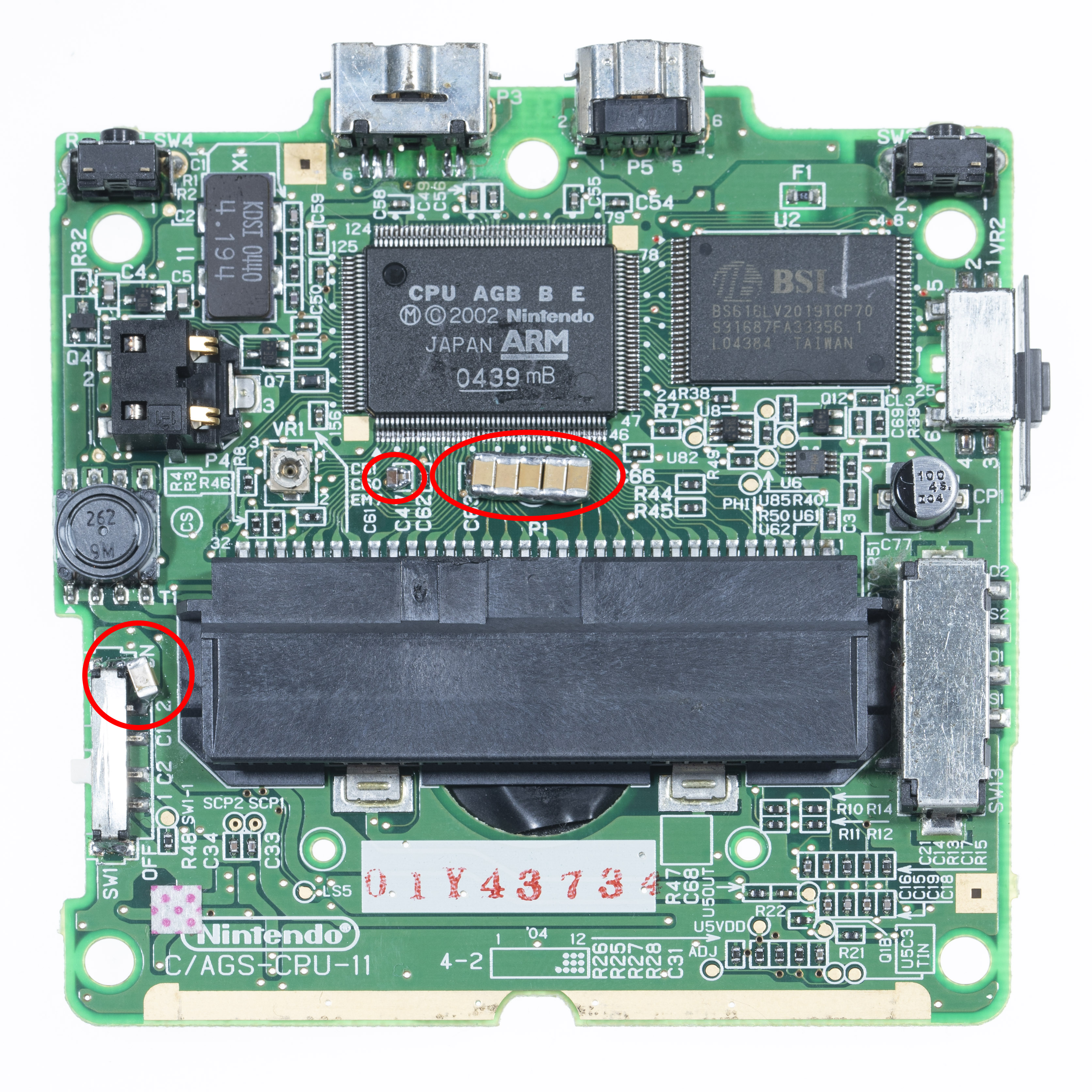 If you like you can stack the capacitors on top of one another instead of side by side. 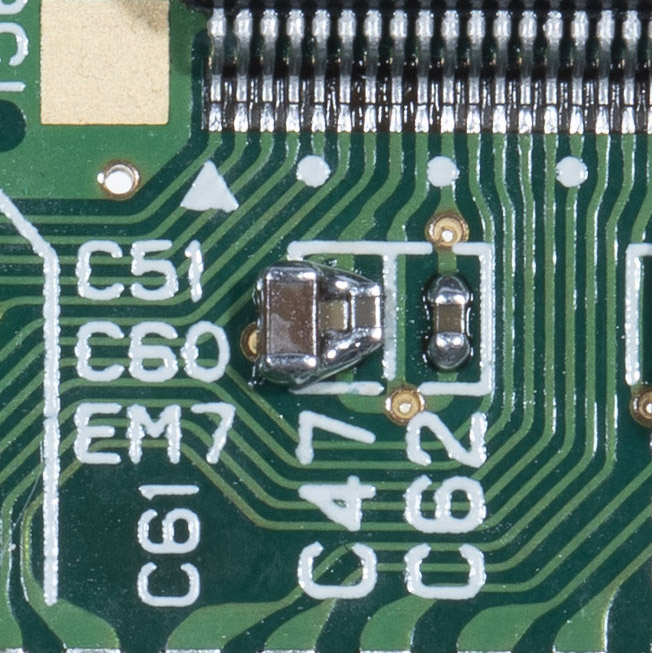 A dehum kit with the capacitors you need are sold in our dehum kit (no need to use the aluminium capacitors that come with the kit, those are only needed for the GBA.

Unlike the GBA, the GBA SP has a new higher speed, more efficient power regulation circuit that does not suffer from the low hum of the GBA when running original GB and GBC games. However, when running GBA games unfortunately it is even worse than the GBA was. The extra power draw and different voltage core engaged in the CPU when running GBA games introduces a terrible low flutter hum.

For that reason we need bulk capacitance adding to the primary VCC power rail, which is on C63. As the SP is limited on space, the only way to achieve this is with 5 220uF capacitors in a row. If you are using an amp other than the CleanAmp, you can separate the capacitors over the screw hole and wire them together, but as the CleanAmp sits over this screw hole you can cover it. 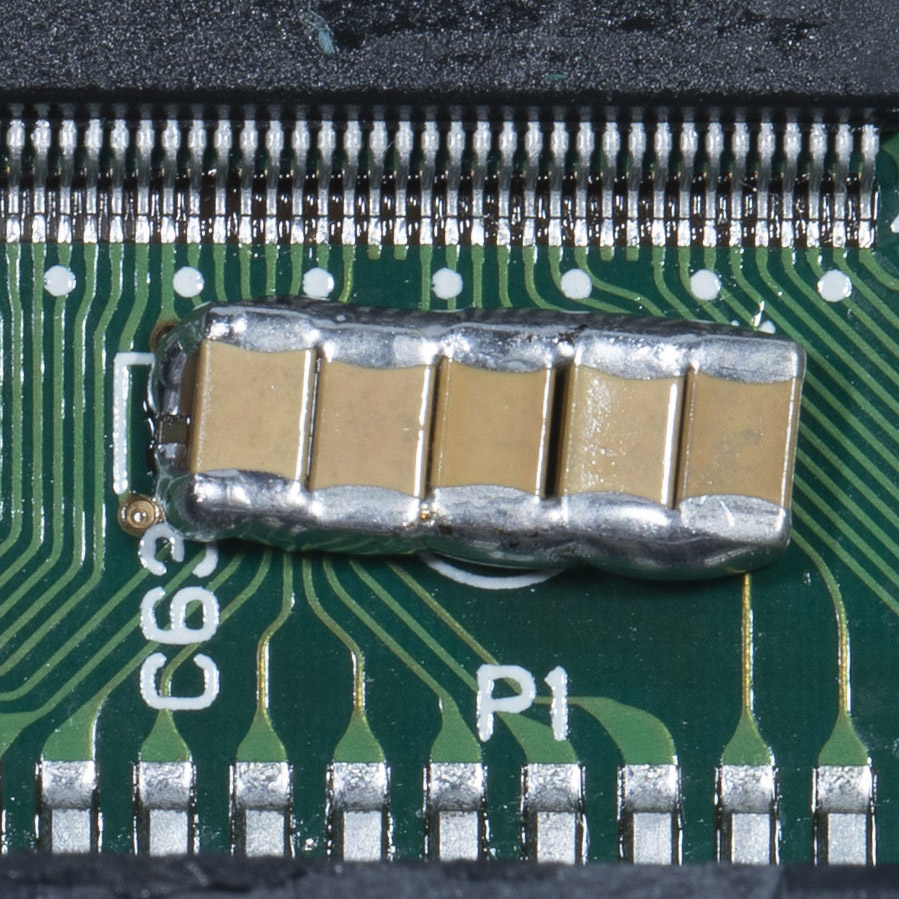 Solder one capacitor to the C63 capacitor, and then daisy change another 4. This will remove the low flutter when playing GBA games.

The SP has a better designed power system so does not struggle as much to stay clean on the current supply for slow speed draw from IPS mods or other power hungry mods, however it does need a little assistance. Add a 220uF capacitor (the same as the once used on C63) to the main power income on the switch. Between the ground shield and the pin 2 as shown, being careful not to short the pin 2 and ground pads together. 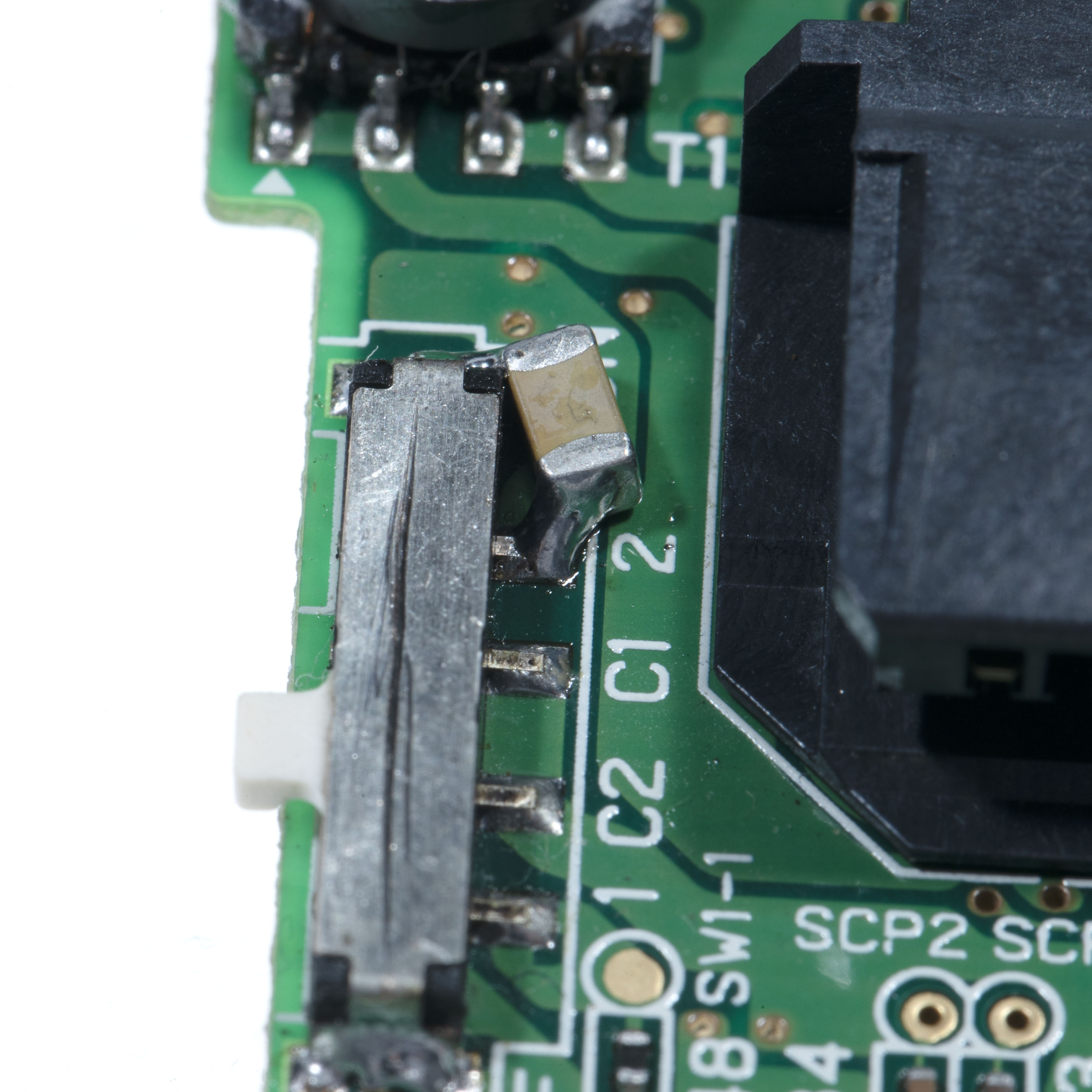 220uF capacitor Soldered to Main Power Income on the Switch

The last piece of noise that seems present on after filtering the hiss and hum appears to be the white noise caused by the system as a whole.

The CPU, power, audio, LCD and RAM all have high speed signals, and without perfect ground returns, decoupling capacitors and a very clean board, you will never remove every bit of white noise.

The good news is with the steps above taken, the white noise on the GBA SP is even lower than the GBA and basically inaudible. So you should now have crystal clear audio.

Does it improve the headphones?

Yes. Filtered correctly like this, the noise will not be present on the headphones either.

We sell all the kits to remove the hum, hiss and amp the audio in our store.

If you would like to give feedback on this article or help out, I have an open discussion on the forum here.

Updated 10 Dec 2021
Did this page help you?
Yes
No
UP NEXT
Battery Charge Circuit (GBA SP)
Docs powered by archbee

TABLE OF CONTENTS
The Volume Slider
The Power Slider
The loud hiss
The low hum
Over Current Noise
The white noise
Does it improve the headphones?
Buying the parts
Improving the audio further